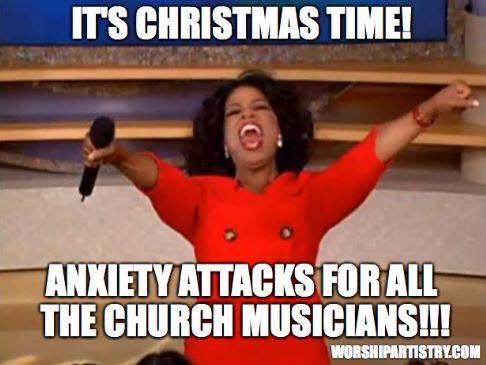 Christmas is a season to be jolly.

It’s also a season when your average church musician and worship team is probably at its busiest, and often not that jolly as the image, borrowed via a meme on Facebook, shows! It’s usually because they are struggling with the songs of the season. For some their difficulty is with unfamiliar carols that contain music which is strange and difficult to play. For others, the issue is with songs which over the years have become too familiar and the difficulty for them is to bring new meaning to classic carols. And of course lastly everyone is struggling with lyrics which are, to put it politely, formal English and full of deep theology (for ‘deep’ read no one understands them)!

1. What about these strange Carols then?

Carols often feature music which would have been Organ driven and that means to keep the movement and the pulse in the music, the chords change every beat of the bar. Not so tricky if you are playing on a piano, but hard, hard work if you are a guitarist. Those passing chords are out of our normal comfort zone.

Practice – every year towards the end of November I actually spend time playing carols in my personal rehearsal. I want them to be familiar. I want to own them. That way I can if necessary conquer those speedy chord changes.

Simplify – if there are too many chords to squeeze in, simplify the arrangement. Cut out those swift changes. Notice that by simplifying the chords you will automatically have modernised the arrangement. Shift them to keys which work for you.

Reharmonise – try experimenting with different chords or variations under the same tune.

2. How to refresh carols.

There are some carols which are worth just leaving alone and accepting that they are what they are. But there are plenty of options for you otherwise.

Tempo – take a fast carol and slow it down, or a slow carol and speed it up. Sometimes a shift of 10 BPM can be enough to change the feel and freshen the song.

Groove – it’s not just the tempo, but also the groove, the feel of the song. Try a funky groove, a rock groove, a steady slow groove, a bit of gospel, some RnB – if you can pull off any of these, give them a go. If they feel like a good idea, rehearse it until it is great.

Listen – get a hold of what other people have done with some classic carols. I always loved Christmas albums which gave new twists on the ways carols could be played. One of those is Tijuana Christmas – Carols played on brass, with swing! What’s not to like. But it was one of those albums which challenged then changed my idea of what could be done. Of course, other Christmas albums are available, but listen to them and how the music fits together. It’s worth remembering that a Carol was a medieval dance tune to help celebrate the feast of Christmas.

The lyrics of Carols can be a challenge due to their strangeness coupled to theological richness. Singers, there is only one way to conquer this:

Read – first off, Read the whole carol all the way through. It is remarkable how many people know the first verse of most classic carols but know almost none of the other lyrics. Read them all.

Learn – go beyond knowing the first verse. Learn them all. Maybe you look down a list of 20+ carols and that looks like too big a challenge. Well, break it down. Learn 2 or 3 this year, then refresh those each subsequent year whilst adding more to your learned repertoire.

So to all the musicians and singers out there, may I be among those who lift you up this Christmas. Thank you for all your hard work each year. And if these thoughts have come too late for this year, start planning now for next year, the make Christmas different next year plan! Sounding good already. Let’s work smarter next year and give ourselves a Silent Night 🙂